To Cling or Not to Cling- Epeorus Clinger Nymph

The inspiration for this fly came with the excitement and preparation for a recent trip to the Madison River in Montana. The Epeorus is one of the most important mayfly emergence's on the Madison, below Quake Lake. The nymphs are stoneclingers, which characteristically cling tightly to the rocks in the heaviest flows of the river; the Slide In is a perfect place for such an environment (don't forget to drop in and say hey to Kelly). They are dark hued, 2 tailed, and have an extremely flat profile.


Nymphs are dark-hued clingers that are easily distinguished by their two tails, a physical characteristic shared by no other mayfly nymph. Many people confuse Epeorus nymphs with another mayfly clinger, the Pale Evening Dun. My theory is that this confusion arises from the fact that the later has a fly named after it while the former lacks that honor. This confusion is easily resolved: simply looking at the tails of the nymph (two for Epeorus) will resolve any uncertainties.
Epeorus nymphs, like all mayfly clingers, are well-adapted to their fast-water environment. Their body, head, and legs are all flattened to hug the rock and minimize the force of the current pushing on them. I often pull rocks out of fast water, and the only mayflies that survive the quick trip through the fast current are Epeorus.
Epeorus nymphs are terrible swimmers (perhaps the worst, considering they don't even migrate or rise prior to emergence!), and if dislodged can drift long distances before regaining contact with the bottom. Despite their pitiful swimming skills, however, they rarely lose their grip, and are seldom available to trout. Epeorus Mayflies by Jeff Morgan

Sure a Clouser swimming nymph, pheasant tail, or fox squirrel style nymph will do the trick but I wanted to take it a step beyond and spin up something a bit more realistic. The pattern I ended up putting together was influenced by the tying prowess of some of my heroes in the fly tying world- Ulf Hagstrom, Steve Thornton, and Oliver Edwards. Boy did this conglomeration rail 'em in the fast water slicks, along the edges of the river. Thank you gentlemen. Cheers! 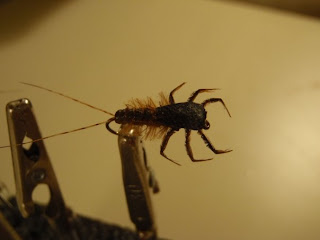