NORTH CAROLINA GENERAL SYNOPSIS 11/09/2010
The trout fishing has been superb this fall. Let's keep it that way. Call 1-800-POACHER or 919-707-0030 to report illegal activity on the rivers and streams, or in the woods. Do your part, take a bite out of poaching.
The 10 day mountain forecast is showing a stint of beautiful fall weather. The warmer temps should turn the fish on so get on the water this week if you can.
It is all dependent on the stream you fish and the time of day you fish it but look for a potpourri of insects on the rivers and streams this time of the year- midges (sz.22-30), BWO's (sz.20-24), caddis (sz.10-16), etc.. The "tiny fly" season is beginning to take hold.
If you see bugs in the air and fish slashing near the surface, these are great indicators of fish that are willing to feed on or near the surface. In this case, try to determine what insects they are consuming and the stage of the lifecycle these insects are at (emerger/pupa, cripple, dun, spinner). Then, prepare your 2 fly rig accordingly (cripple and emerger, dun and emerger, etc.).
If you dont see this behavior, fish a double nymph rig (pheasant tails, stripper midges, zebra midges, disco midges, Hise's hetero-genius nymphs, egg patterns, Mercer's micro mayflies, copper John's, shop vacs, serenstupidies, Hise's sili skin caddis, rainbow warriors, Duke's Prince John, gooey caddis larva, squirmie wormy, etc.) for the most consistent success. Nymphs fished deep is always a great way to go, day in and day out on any trout stream in the world. Remember, most of the time, larger trout will move laterally for their food as opposed to vertically. 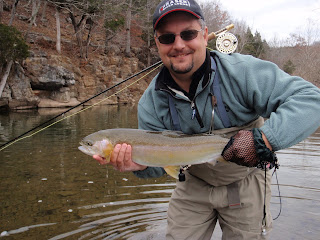 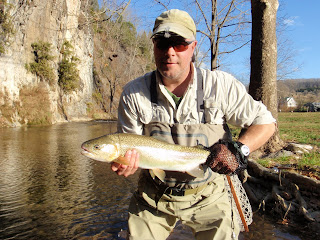 NANTAHALA RIVER- NC
Macon County: Delayed Harvest Section of the Nantahala River (Whiteoak Creek to Nantahala hydropower discharge canal). Below the powerhouse is an excellent Tailrace for roughly 8 miles. Both sections offer great angling opportunities on a year-round basis. In fact, the Nantahala is listed in Trout Unlimited's Top 100 Trout Streams, and it has been featured in numerous major magazines. The Nantahala is a premier white water destination in Western North Carolina so be prepared for a flotilla of kayaks and rubber rafts. Dont be discouraged however; the wily trout are used to this floating traffic. In the upper section you'll want to fish small dries and nymphs under the overhanging bushes, especially rhododendrons. In the Tailrace portion, fish dries and nymphs that represent BWO's, and midges. Egg and worm patterns, and woolly buggers are also extremely productive.
TUCKASEEGEE RIVER- NC
Jackson County: Delayed Harvest Section of Tuckasegee River (N.C. 107 bridge at Love Field to the Dillsboro dam). The Tuckaseegee River flows through the towns of Sylva, Webster, and Dillsboro North Carolina. Fishing has been great on the Tuckaseegee. Use the usual suspects as those on most tailwater streams with a few crazy attractors (eggs, worms, nymphs, & streamers) thrown in the mix.
NEW RIVER- NC
Despite its name, the New River is considered to be possibly one of the oldest rivers in the world, between 10 million and 360 million years old. It flows in a south to north course, which is against the southwest to northeast topology of the Appalachian Mountains and the west to east flow of most other nearby major rivers; especially in Virginia and North Carolina. It is formed by the confluence of the South Fork and the North Fork of the New. The New River is home to many species of freshwater game fish including bass, trout, walleye, muskellunge, crappie, bluegill, carp, or flathead and channel catfish. It is considered, by many, as one of the finest smallmouth rivers in the country. It is a extremely large and often ominous stream to fish. Anglers will find sections of fast riffle water, pools, deep pockets, and glassy flat water. It is best fished within a watercraft but can also be waded in various sections throughout; especially near the State Park accesses and along the North and South Forks. The smallies are plentiful and fairly forgiving to catch. They average 10 to 16 inches and it is not uncommon for anglers to find smallies that range in size from 18 to 24 inches. Streamers and nymphs work throughout the season and poppers rule from the summer through the fall. Try streamers like tequeely, woolly buggers, EZ mite, Dick Smith, and various baitfish and crawfish patterns.
SMOKY MOUNTAIN NATIONAL PARK- HAZEL, FORNEY, AND EAGLE CREEKs, etc. NC
Throw a dry/dropper rig for the best success. Try a stimi chew toy, royal Wulff, cdc para Wulff, stimulator, or elk hair with a small nymph 12-20 inches below. The wild fish are beginning to spawn so let them do their thing peacefully.
MOUNTAIN WILD TROUT STREAMS- NC
Stealth on the approach and a good presentation are the keys to success while fishing these small streams. Always remember, wild trout (and brook char) are very opportunistic and will eat just about anything when it is presented properly (and if not spooked). Try a dry/dropper set up with a high floating dry (stimulator, stimi chew toy, humpy, elk hair, light cahill, cdc para wulff (cahill), etc.) and a pheasant tail, Hise's heterogenius nymph, tellico nymph, Mercer's micro mayfly, hare's ear, lightning bug, Ian's brass ass, Hise's sili skin caddis, or copper John as the lead fly. Also, muddler minnows, Mickey Finn's, wooly buggers, and black nosed dace swung and stripped around can be quite productive. These wild fish should be doing the spawing thing so let them do it in peace.